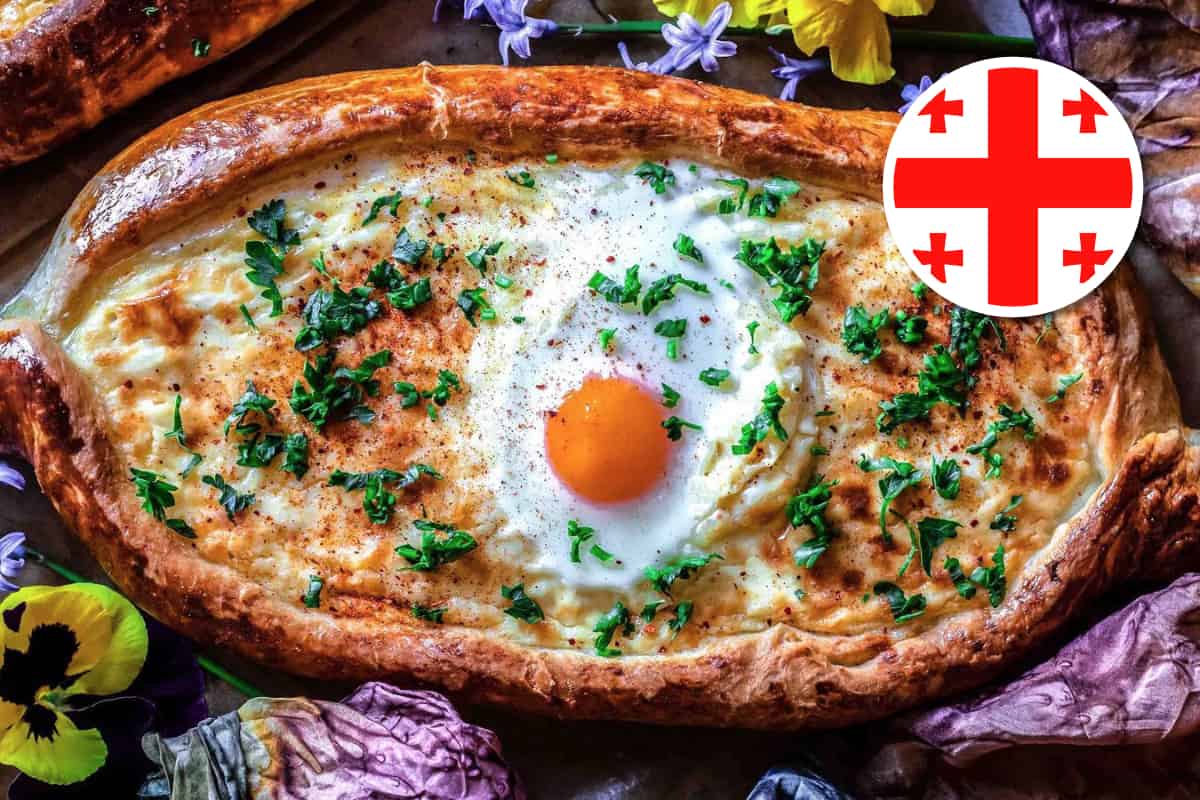 Since its independence from the Soviet Union nearly 30 years ago, the Republic of Georgia has gone through some tumultuous times. One thing that has remained constant, though, is the rich history of the Caucasus region, with its hospitable people, cultural traditions and especially cuisine. For a number of reasons explained below, Georgian food culture is one of the best kept secrets that is now exploding on to the world culinary scene.

The Evolution of Georgian Food Culture – Origins, Influences and Traditions

Georgia, along with Azerbaijan, Armenia and the southern parts of the Russian Federation form the region that takes its name from the Caucasus Mountain range.

Georgia is flanked by the Black Sea to the West and the Caspian to the East. Its southern borders are occupied by Turkey to the West, then Armenia and Azerbaijan as you move east towards the south western shores of the Caspian.

Georgian cuisine grew through a series of cultural and political influences. Around the time of Christ, Georgia was occupied and influenced by the Greeks and the Romans in succession, modern day Georgia had several stops and starts after its beginning in the 11th century AD.

The various influences continued throughout the next thousand years. Georgia was on the fabled Silk Route, which led to early introductions of spices and culinary culture from China, India and the Far East. This was further exacerbated by Mongol invasions in the Middle Ages and the later fight between Ottoman Turks and Persians in terms of shaping the culture and cuisine.

The evolution of Georgian food culture and cuisine can be viewed through the lens of the following eras:

Throughout the evolution of Georgian cuisine, some fundamental traditions remained. Georgians are among the most ancient people who have continuously adhered to the same cultural heritage over 3000 years – even though many of the 5 million people of Georgian descent are now spread over the globe.

As described above, Georgia is a crossroads between European, Asian and Mediterranean culture and how the forces of history and nature that have come together to shape the cuisine of the country. In many cases, dishes common in the other countries of the Caucasus are consumed as voraciously in Georgia, same goes for sauces, spices and flavorings.

Here are brief reviews of factors that have helped influence Georgian cuisine.

Six of the major culinary influencers, region wise, are listed below:

The regions not covered specifically above, such as Kartli, Mtianeti, Khevi, Lazeti, Khevsureti, Pshavi, Tusheti, Racha-Lekhchumi, Samtskhe-Javakheti and Svaneti, each have their own distinctive cuisines as well.

Georgian Food Influences/Imports from Other Cultures

As mentioned before, Georgia has many differentiated cuisines due to the different indigenous people and the waves of invasions and cultural traditions that have been passed down by the Greeks, Romans, Turks, Persians, Mongols, Arabs and the other nations of the Caucasus – namely, Armenia and Azerbaijan. Russian influences are also present, as is the impact of spices from South and South East Asia, and elsewhere in the Mediterranean, during the spice trade that was conducted along the Silk Route.

Georgians love food, and holiday and religious celebrations vary widely from region to region, it is sometimes difficult to pinpoint specific food that is eaten during a specific time across the country. More generally, any occasion to eat, drink and be merry is embraced by one and all in Georgia. There are some exceptions, of course. For example, on Christmas Eve and New Year, the main servings include either Turkey or Chicken with Satsivi, described below. Gourian Pie is served in mountainous regions. Ghomi is eaten in Samegrelo. During the Georgian New Wine festival in the spring, many types of newly made wine is served with Mtsvadi, fresh bread, cheeses and other delicacies.

Georgian food style varies from region to region, but the one constant is family style servings. Some of the common styles of dishes are as follows:

List of 23 Georgian Spices, Ingredients, Sauces, and Condiments You May Need

The best expressions of Georgian cuisine often come from home cooked food which blend the rich traditions and culture of using spices that the Caucasus inhabitants learned over centuries.

Many of the spices used in India, Turkey, Iran and even China, Italy and Greece have found a home in Georgia.

To best understand the traditional spices, it is important to understand some of the driving forces. Walnuts and pomegranates are two for sure.

The list below highlights some of the spices that are used repeatedly in the cuisine, including quite a few spices and herbs that are similar to what is found elsewhere but are made from plants native to the Caucasus.

The second part refers to fabulous spice mixes which are to date not well-known but are just awaiting discovery to take their rightful place among savory and sweet mixes.

Many of the condiments above are used in combinations, as can be seen from the large variety of spice mixes and sauces outlined above.

Georgian cuisine, with its list of haute cuisine and regional fares, has too many variations to capture in one list. The ones listed below are representative fares that many will recognize.

This Samegrelo dish is made from coarse cornmeal and topped with strips of Sulguni cheese and butter.

This is one of the most popular Georgian stews, made from Lamb Chops or Veal, garnished with onions, tarragon leaves, tkemali, dry white wine, fresh mix of parsley, mint, dill and coriander, garlic and salt. A variation calls for beef and mushrooms.

A cooked stew with meat, qovurma is similar to the Iranian ghormeh sabzi. It is cooked with green herbs, dried fruits and vegetables. The meat is fried in butter and verjuice (or sour grape juice) may be used as flavoring. Lemons, pomegranates and dried apricots are other additions in regional versions of the dish.

The Georgian version of kofta is similar to what is found all around the region (e.g. Turkey, Iran, Mediterranean) but with some local touches. The recipe calls for ground beef, kosher salt, yellow onion, garlic, lemon juice, breadcrumbs, Berbere spice blend, parsley, cilantro, mint or dill, kosher salt and ground black pepper mixed with olive oil. The dish is usually served on bread with fresh tomatoes and onions with a side of Tahini sauce (mint-yogurt dip).

The Georgian version of shashlik, these skewers are made from well-marbled pork shoulders – so the fat sizzles over the open fire (often the embers of grape vines). The pieces are often finished off with a drizzle of fresh pomegranate juice. They are traditionally served with tkemali, and sides of khachapuri, pkhali and eggplant and walnut rolls would make a full meal. The other ingredients are simple, usually wine vinegar and black pepper, plus salt to taste.

This classic Georgian sausage from the Mingrelia region is made from ground pork, intestines or chitterlings, pepper, garlic (occasionally) and onions.

A traditional dish from Guria and Imereti, Pikhali is a dish with chopped and minced vegetables, including cabbage, eggplant, spinach, beans and beets, which are seasoned with ground walnuts, vinegar, onions, garlic and various herbs. The base is made out of bazhe.

This traditional Georgian dish is made with fried eggplant roll-ups stuffed with a walnut filling and pomegranate sauce. The filling contains garlic, coriander, cayenne pepper, blue fenugreek and vinegar besides walnut. The dish can be garnished with red onions, coriander or pomegranate seeds.

This traditional dish is made from poultry (turkey can be substituted for chicken) that is prepared with satsivi sauce that is either served on the side, or with the meat served in the sauce. The dish originated in the Guria and Imereti regions and is popular in winter holiday feasts.

This kidney bean dish can be cooked in many ways. One classic version uses garlic, onions, bay leaves, dried mint, dried and fresh coriander, dried Summer Savory, fresh parsley and salt to taste. Eggs are mixed into the classic recipe at the last stage.

This dish is found in Georgian mountain regions, it is similar to the Turkish or Armenian manti or the Tibetan momo. The main ingredient is spiced meat (beef, pork or lamb), a mix of herbs, carum, cumin, satureja, chili pepper, onions and garlic. Non-meat fillings such as cheese, potatoes or mushrooms can also be used.

The traditional Turkish creation is very popular in the South Caucasus region as well. Stuffed vine leaves (alternatively cabbage) are filled with ground meat, cucumber, eggplants, apples or quinces, along with sauteed mint, rice and saffron. In Georgia, tolmas are often prepared with tkemali or other traditional sauces.

This family meal is made in classic Georgian style. A whole chicken, potatoes, onions, a fairly substantial amount of dry marigold, oil and salts are the main ingredients. The chicken pieces are arranged on top of the fried potatoes in a deep dish. Onion rings are put on top and dried marigold sprinkled.

Khachapuri is the classic cheese filled bread from Georgia. Every major region has its own variation – since the core bread is baked into various shapes and sizes before the cheese is filled into the central dip. For example, Imeretian Khachapuri is made by pastry infused with yeast and white Imeretian salted cheese, Adjarian khachapuri is a boat shaped bread with cheese, butter and egg yolk in the middle, Ossetian (Osuri) khachapuri has potato and cheese filling and is commonly called Khabizgini. Gurian khachapuri, also called Gurian Pie is a traditional calzone style Christmas dish with potato filling.

There are regional variations of many of the dishes outlined above, with deep crossovers with cooking styles from neighboring countries such as Iran, Turkey and Russia – which means that you can enjoy the same dish in a dozen different styles as you travel through Georgia. Here’s a recipe.

The Verdict … Georgian Food Culture is the “Next Big Thing!”

The best way to describe Georgian cuisine is perhaps a fusion of Turkish, Russian and Caucasus regional influences, but as discussed above, the influences of cultures and cuisines far and wide, from India to Mongolia and Italy, Greek and Arabia have left indelible marks of Georgian cuisine. One advantage of the widespread diaspora of Georgian expats is that it won’t be too difficult to locate a restaurant if you are in a major city. Go check out the food – you will never be disappointed with the rich variety and taste of an authentic Georgian recipe.