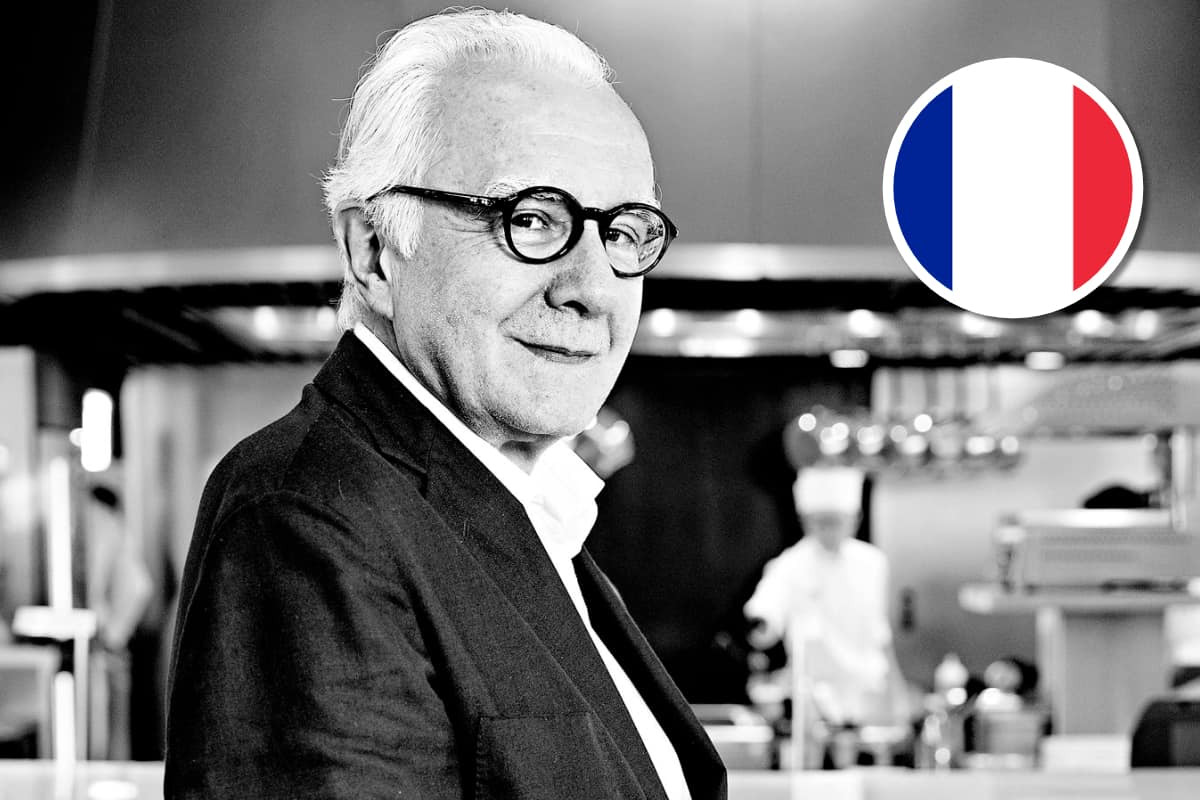 As we put together this list of the most famous French chefs in the world we didn’t want to simply focus on the names that are familiar to western audiences but more importantly introduce the world to several talented French chefs that you have not heard of, yet.

French food culture has brought people together for years and has inspired chefs around the world to learn how to cook the culinary delights. From savory main dishes to decadent chocolate and pastries, French food has long been the envy of chefs everywhere.

Many of the dishes we eat here in the United States were either inspired by or directly related to French cuisine. Here are the top 10 famous French chefs that brought us those inspired dishes:

Like many other famous chefs on this list, Pepin began his culinary journey at a very young age. His parents owned a restaurant in which Pepin worked as a young child and at age thirteen he started an apprenticeship before moving to Paris at sixteen and working his way around different restaurants and honing his skills.

Pepin came to the United States in 1959 where he earned a degree at Columbia University. He then became friends with many influential people in the culinary business like James Beard and Julia Child, who were already popular and famous themselves.

Pepin continued to earn degrees and improve on his education until 1970 when he opened a restaurant named La Potagerie. He has numerous credits in television as well as authoring many books and collaborating with other artists. You can still watch the chef making video tutorials on facebook.

Ducasse grew up on a farm in Orthez, France. As a teenager he began an apprenticeship at a French restaurant and went on to work as an assistant under chef Roger Verge where he learned the basis for what would later become exceptional cooking skills.

During the 80s Ducasse worked in several restaurants and ended up opening his own country inn named La Bastide de Moustiers. In the year 2000 Ducasse came to the United States and opened the Alain Ducasse Restaurant in the Essex hotel in New York City which quickly attained 3 Michelin stars. At the time Ducasse was the only chef to have three restaurants at the same time all with 3 Michelin stars.

Ducasse has gone on to open several more restaurants, author cookbooks such as Alain Ducasse Culinary Encyclopedia, My Best: Alain Ducasse, and Alain Ducasse’s New York and also upstart cooking schools as well as offer his services as a consultant. Ducasse’s dishes have garnered praise from the culinary community all over the world and have paved the way for so many chefs ahead of him.

Ripert is a notable French chef who owns the restaurant Le Bernardin in New York City. The restaurant has earned rave reviews since it opened, topped many best lists and has earned three Michelin stars.

Ripert started cooking at a young age, learning at home from his mother in Andorra, France. Cooking with her in the kitchen became his favorite pastime and proved to be the beginning of his love for French cooking.

He moved to Paris at the age of 17 to work in the restaurant La Tour d’Argent. At 24 Ripert moved to the United States where he worked in several restaurants until he became part owner of Le Bernardin.

Ripert has had a successful media career as well, starring in several shows including Top Chef and Anthony Bourdain: No Reservations. In addition he has authored books including On the Line: The Stations, the Heat, the Cooks, the Costs, the Chaos, and the Triumphs, My Best: Eric Ripert and his memoir 32 Yolks: From My Mother’s Table to Working the Line.

Ripert is also the chair of City Harvest’s Food Council where he brings other famous chefs together to raise money and food donations.

Keller began his culinary journey as a pastry chef and worked his way around different restaurants, perfecting his craft and finding his own style as he went. He then trained under several different high-profile chefs before coming to the United States in 1982.

By 1986 Keller was the executive chef of Fleur de Lys in San Francisco. After that he opened a burger bar in Las Vegas Nevada to rave reviews. He made the normal American burger into an artform that called people from all around the country.

Keller is also an author of books such as The Cuisine of Hubert Keller and Hubert Keller’s Souvenirs: Stories and Recipes from My Life and has also consulted on other books. Keller has won numerous awards including the James Beard Foundation/Perrier-Jouët award for America’s Best Chef in California.

His television appearances include the shows Top Chef Masters, Secrets of a Chef and was a judge several times on the hit show Top Chef.

Boulud hails from Lyon, France and is one of the most renowned chefs in the world. He moved to New York City in 1982 and began his culinary career, learning from chefs in the city and beginning to invent his own cooking style.

He now owns several restaurants in New York City, Boston, London, Miami, Montreal, Palm Beach, Toronto, Singapore and Washington D.C. Boulud has won six James Beard awards over the course of his career for Best Chef in America and others. He has been on numerous television series such as Great Chefs and Top Chef Canada.

Boulud has penned many books including Daniel’s Dish, Entertaining at Home with a Four-Star Chef, Daniel Boulud’s Café Boulud Cookbook, Braise: a Journey Through International Cuisine and Daniel – My French Cuisine.

Boulud is also a philanthropist and supports several charities most notably Citymeals-On-Wheels and also operates The Daniel Boulud Scholarship Endowment Fund which sends aspiring American culinary students to France to learn French cooking. Boulud’s food is innovating and fresh, making him one of the most famous French Chefs.

Ansel is slightly different from many of the other chefs on this list as he is a pastry chef, however that does not make him any less of a culinary wizard. Like many chefs he began at a young age, apprenticing in different restaurants and finally falling in love with pastries and deciding that was the direction that he wanted his culinary career to move toward.

He moved to the United States and worked in the Restaurant Daniel in New York City as the pastry chef. After this he opened his own bakery aptly named Dominique Ansel Bakery and invented the cronut which is a croissant donut to much fanfare. It was even named Time Magazine’s Best Inventions of the Year in 2013.

A couple years later he opened a second bakery, also in New York. Another bakery in London and then one in Los Angeles followed.

Ansel was named World’s Best Pastry Chef in 2017. Ansel has also authored cookbooks Everyone Can Bake: Simple Recipes to Master and Mix and Dominique Ansel: The Secret Recipes. His pioneering of the normal pastry into decedent deliciousness propelled him on to our list of most famous French chefs.

From Nevers, France, Guy Savoy grew up learning how to cook from his mother who owned a restaurant. He went on to be an apprentice and then work in several restaurants before moving to the United States and opening a restaurant bearing his name in New York and then another one in Paris followed by one in Las Vegas Nevada.

Savoy has earned three Michelin stars for the past four years running. His dishes are elegant and have become staples in French cooking in the United States. He has tutored many chefs over the years including the famous Gordon Ramsay.

Savoy has won many awards over the course of his career including the Michelin stars, the Forbes five star award and the AAA Five Diamond Award. La Liste, another of Savoy’s restaurants has been named the Best Restaurant in the World for four years. He is also an author who has penned the cookbooks Vegetable Magic and Guy Savoy: Simple French Recipes for the Home Cook.

As with most of the chefs on this list, Herme began his career at an early age. He grew up in a family of pastry chefs and lived up to the calling. At age fourteen he began his first apprenticeship with Gaston Lenotre who is a world-renowned pastry chef.

He began to hone his skills and branched out into unfamiliar pastry territory, straying from the traditional to make more eclectic pastries. Herme has opened several bakeries to showcase his delicious pastries and chocolates in Paris and Tokyo.

Many people flock to his bakeries to grab a taste of the decadent foods and find what new dishes he has created. Herme constantly innovates and transforms his works to push the envelope and bring taste buds to life. His gourmet sweets have earned him praise from around the world and was even named France’s Pastry Chef of the Year.

Raymond Blanc was born in eastern France with two sisters and two brothers, all of whom learned to garden and then cook what they produced. Blanc’s career started as waiter and moved his way up through several restaurants until he was able to open his own in 1977 named Les Quat’ Saisons which became a huge hit and went on to earn two Michelin stars.

He has made several television appearances on shows such as Food & Drink, Take Six Cooks, Masterchef and several series of The Restaurant. Blanc has authored numerous books and cookbooks including Kew on a Plate, The Lost Orchard, Kitchen Secrets, A Taste of My Life and My Kitchen Table: 100 Recipes For Entertaining all of which have sold thousands of copies.

Torres grew up in a fishing village in the south of France, beginning his culinary apprenticeship when he was fifteen at a small pastry shop, learning the ways of French pastry cuisine at a very young age.

He went on to work in a two-star Michelin restaurant and attended culinary school, earning a master’s Pastry Chef degree. He taught the art of baking pastries in a culinary school in Cannes for three years.

When he moved to the United States in 1988, Torres started out at the Ritz Carlton Hotel as the Corporate Pastry Chef and then moved on to Le Cirque for eleven years.

Torres also has television credits to his name, appearing as a judge on the Next Great Baker and also hosting his own show Nailed It!. He has won the James Beard Foundation award for Pastry Chef of the Year as well as many other accolades.

He has authored two cookbooks, Year in Chocolate: 80 Recipes for Holidays and Celebrations and Dessert Circus at Home: Fun, Fanciful, and Easy-to-Make Desserts that have become extremely popular.

Who are your favorite French chefs?

The top French chefs on this list have sculpted how we view French cuisine and have had the courage to innovate and inspire to bring us the foods we love. French foods are rich in flavor and are emulated by countries around the world, making these chefs the authors of wonderful creations.

Popular American Chefs like Julia Child have been so inspired by French recipes that these famous French chefs have dedicated their lives to bringing French food to the United States. Whether or not you know it you probably have a favorite dish that is French in nature and you have these French chefs to thank for it. 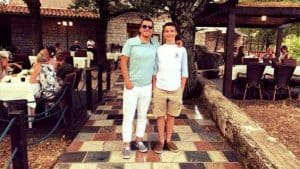